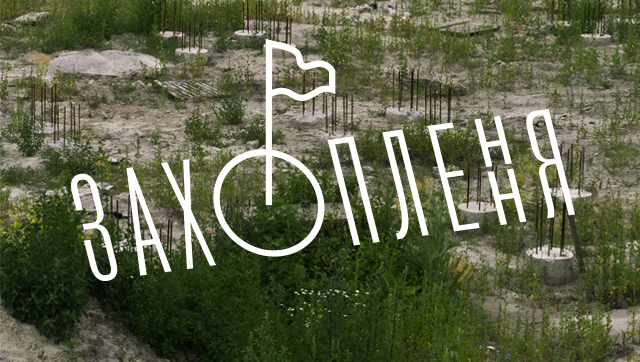 ZAHOPLENNYA is a curated program of temporary public art installations throughout the city of Kyiv, running from September 18 to October 12, 2014. The project challenges artists and viewers to creatively address our changing physical, emotional, and social concepts of occupation.

On Monday June 9th, 2014, IZOLYATSIA’s facilities in Donetsk were seized by forces of the self-proclaimed “Donetsk People’s Repbulic.” In order to continue its work as a Platform for Cultural Initiatives while in exile, IZOLYATSIA has invited artists from Ukraine and abroad to participate in a program of installations in public spaces around Kyiv. Just as IZOLYATSIA has been forced to relocate to a new city and reimagine its role in cultural work, ZAHOPLENNYA asks artists to reposition their work into new contexts and address the complicated results of occupying a space.

Conceived of and curated by New York based artist Clemens Poole with the help of IZOLYATSIA’s team, ZAHOPLENNYA attempts to animate the public space of Kyiv with unexpected interventions, actions, happenings, and workshops. Each participating project has been developed with an individual artist working in a variety of media including sculpture, video, sound, print, photography, and performance. Each artist’s project represents a unique approach to not just the chosen space and medium, but also to the interconnection of people, projects, and ideas.